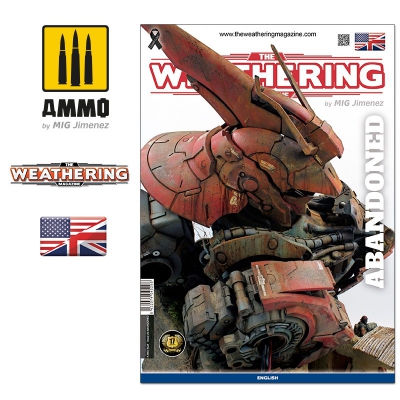 The latest issue of your favourite magazine is a real treat for fans of extreme weathering with a focus on abandoned vehicles, aircraft, and Mecha. This wildly popular subject provides the opportunity to showcase multiple weathering effects accumulated in different conditions and varied environments over long periods of time. Abandoned machinery is a great canvas for learning and practicing to expand your knowledge of weathering effects and techniques including rust, chipping paint, and streaking effects. In “Beast in the River” which shows extreme rust and paint wear on a T-55 abandoned in an Afghani river. With “Radioactive Rust” you will be shown how similar effects accumulate in a less humid environment as a 1/72 Zil 131 is left to rot in the contaminated city scape. This article also demonstrates how nature slowly reclaims not only an abandoned vehicle, but also its surroundings. In another unique example, an AMMO T-54 is used as the basis for an abandoned tank on the High Way of Death, exposed to extreme dry and hot conditions. The “Derelict” article portrays an abandoned T-33A with extreme weathering not just on the exterior but also inside the rotting interior. With the abandoned “MSN - 03 Sazabi” you will see Mecha in a different way. This incredibly popular genre is often depicted in a clean anime style of painting, this robot has been left exposed and pilotless to accumulate extreme rust and dust. As it forms the focal point of a diorama it also shows the effect of the Mecha's destruction on a nearby structure. Finally, “Sweet Retirement” shows the effects of time on an abandoned Chieftain not lost in battle, but instead left on public display without any maintenance or upkeep. With each article you will discover tips and techniques that you can easily transfer to your models to radically improve your finished projects. Whether a beginner or experienced modeller, you are guaranteed to be inspired and learn from this issue.