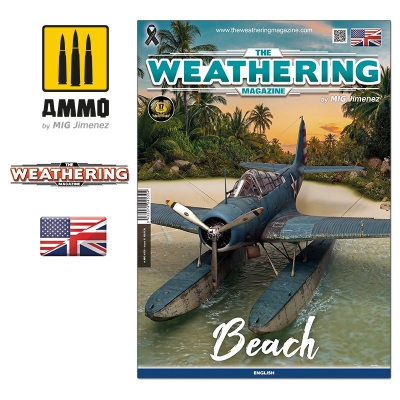 The latest issue of your favourite magazine concentrates on an iconic scenic feature: the beach. A great environment for our model kits and dioramas, whilst presenting interesting weathering and narrative opportunities across multiple themes. For example, as the setting for a sci fi battle: “Battle on the Beach” shows the result of a conflict between two amphibious mecha: MSM-07 Gok Production & MSM-04 Acguy. Whilst “Surfin Bird” shows a much more peaceful scene with a landed Douglas TBD-1A and the effects of sea and sand weathering on aircraft, as well as the transition between sand and vegetation. A less tranquil beach is shown in the “Boat that Won the War,” which shows how to create violent waves, and the LCVP caught in them. An AAVP7A1 RAM/RS amphibious assault vehicle is then shown step-by-step, detailing the weathering of sand on the tracks of an armoured vehicle, as well as the wet effects caused by it's journey. “What Lies Beneath” shows the German coastal defences of France in 1944, and how to paint and weather the camouflage of the defences, and model its surroundings overlooking the beaches. “The Lonely Bay” takes a more panoramic view in showing how to create the illusion of depth within the sea, and waves crashing on the coast. Finally, “Wading Sherman” shows a partly submerged Sherman in 1/72 scale. A gallery of author's beach scenes will help to inspire more beach themed models and dioramas: whether a beginner or experienced model this issue will leave you inspired!