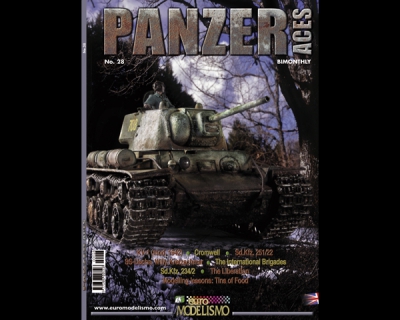 2. KV-1 (mod. 1942)
Step by step article dedicated to a system of theatrical painting with which spectacular results can be obtained in a short time.

16.Cromwell
Excellent accomplishment of a winter camouflage very spoiled in a 1/72 model. The work is completed by a series of color profiles.

22.Sd.Kfz. 251/22
The last versions of the classic german halftrack turn out to be specially interesting. In this occasion the work is dedicated to the variant equipped with an antitank cannon of 75 mm.

32. SS-Uscha. Willy Kretzschmar
Painted with the mastery that characterizes this author, the figure in question represents a famous "ace" of the Panzer troops.

36. The International Brigades
Original transformation of a figure to obtain unique piece. The work is completed by photos of a real uniform and an illustration of the Badges of the Spanish Popular Army.

42. Sd.Kfz. 234/2
One of the most attractive vehicles of the Second World War was the Puma. Now we dedicate a magnificent work to scale 1/72 with several illustrations in which diverse schemes of camouflage can be seen.

50. The Liberation
Spectacular diorama that shows the liberation of a French population by the American troops. The vehicles are a Jeep Willys and a M3A3 Stuart.

62. MODELLING LESSONS: Food Cans
Step by step explanation of a simple method to realize these complements