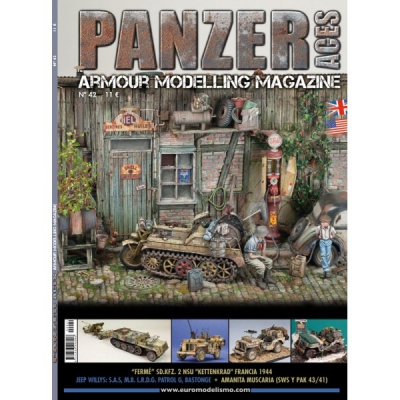 PA57 2.- Ural 4320 BM21 Grad Undertaking a truck like this in the 1/48 scale and in resin isn't in every modeler's purview. It is also quite complicated to make hard edged camouflage masking on the difficult surfaces of this BM21. Domingo again makes a full use of his skills with this special and original piece. Do not miss out on his work applying dirt on the lower areas of his vehicle. 14.- BRDM2 Joaquín García Gázquez is back with a masterclass with this light vehicle on wheels. As usual, Joaquín engages in an uncomplicated assembly work, which is at the same time quite enjoyable and neglects no details. He caps his work with a fantastic paintjob that you will be able to appreciate in concise step by step pictures. A true classic; as usual. 28.- MAZ 537 This is another heavy vehicle on wheels, and it is Mikolaj Marcinowski's introductory project. This spectacular truck has been carefully detailed with both P.E. pieces and some scratch work. But the real treat here is the uncomplicated, direct and realistic paintwork that he has done. 38.- T-90 Chema Cabrero is another frequent featured author, and he shows us his particular take on this MBT. The last generation model kits have such a high quality detail, that we can often get spectacular results like this particular Meng product. Chema's paintjob is based on a light color modulation enhancing the different elements on the turret of this T-90. He has also opted for leaving the engine compartment open which is not that common at all. Also unusual as well is the exclusive use of acrylic paint in this kit. 50.- ZMA Özgur Günner is a frequent Turkish collaborator featured in many publications making his debut in this issue of Panzer Aces with this original ZMA. Turkish vehicles aren't frequently featured around, and in this case Özgur has made the choice of faithfully portraying this light 113 vehicle from a reference picture. As you'll see he has successfully recreated the peculiar NATO colors seen in the real life vehicle.